These two signs appeared on the Vanport lot at MLK & Alberta recently: 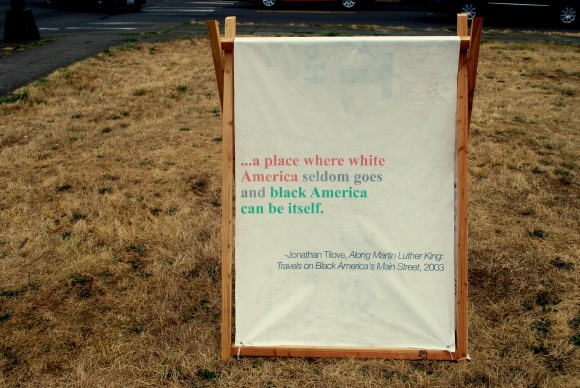 The second question [“Are there any nice ones?”] has become more nettlesome as time has gone on. The implication of this question is that the streets might do more honor to King is they were nicer, a point of view expressed even by many folks on King. But why? If we wanted nice we could have undertaken a journey along Pleasant Street. Gentrification is about making a street “nice.” King’s life was not.

The genius of King streets is how they honor Martin Luther King in precisely the way that the national holiday cannot, by provoking passions and controversy and conflict, by stirring fervent debate about the meaning of his life and what kind of street would do him credit. They hit people, quite literally, where they live, where they work. And by laying bare the racial fault lines in one community after another, by calling attention to the circumstances of life in the heart of the black community while demanding better, the streets that bear his name are Martin Luther King’s greatest living memorial. They stir, they disturb, they tell the truth[.]

[U]p the West Coast black folks arriving in Portland, Oregon – drawn… by the lure of jobs in wartime shipping – encountered signs in store windows all up and down Union Avenue: WHITE TRADE ONLY. Today, Union Avenue is Martin Luther King Boulevard, the spine of the neighborhood they call “the soul of Portland.”

But this ghetto in this, one of America’s whitest big cities, would be laughed out of any serious national competition. Too leafy. Too ruly. And these days, yesterday’s ghetto is today’s good investment. Property values are rising.

Sitting in Stellar Coffee, one of the rare black-owned businesses on MLK, Charles Bolden despairs of the black future on the block. “In ten years,” he worries, “I don’t think any blacks are going to be here…”

To Bolden, this is all pretty simple. Whites want to reclaim the “reserve” where black people have been living…

Yes, [O.B.] Hill says, Portland’s MLK is changing. “If people cannot afford to stay, they leave.” And, he continues, “Wherever they are moving to, you can rest assured that there are people moving out as they move in, ’cause that’s the nature of this game. Once black people begin to move into a community, white people exit it.

“Movement is as natural as the movement of the sun,” Hill says. “You have the most creative people on the Earth. Wherever we move, we’ll be able to get by.”

Update (August 29th): a side panel was added to the frame, and it reads:

Spreading Rumors is a series of projects, a group of people, working on ways to distribute ideas in our changing cities. There are many more of these shapes around town, made by people who are asking questions about private property, public spaces, and development.

Reblogged this on Our Bikes (and Desks) in the Middle of the Street and commented:
This is an excellent follow-up//complimentary photo-blog post about a parallel street to N. Williams Ave. (Portland), both literally and figuratively. MLK in Motion is a blog that is proactively tracking the rapid changes on the boulevard. Same story, different street.

[…] of a neighborhood. You can view the first Spreading Rumours signboard that was placed at this site here; there are others around town, including one that’s been up on Mississippi Avenue in front of […]